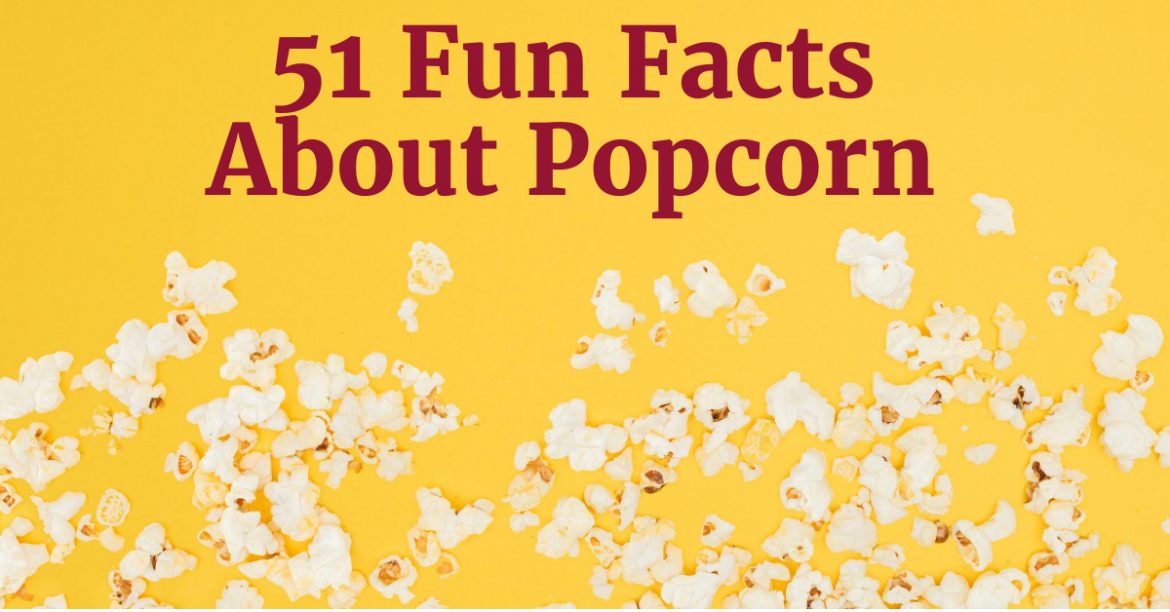 Popcorn is snack loved by millions of people around the world. We like our popcorn sweet, salty, buttery and even plain. But there’s more to popcorn than you might think! Check out these 51 fun facts about popcorn. I bet you’ll learn something new!

1. More than 17 billion quarts of popcorn are consumed by Americans every year. This amount would fill the Empire State Building 18 times.100g) serving is: (University of Nebraska)

2. The average American eats about 63 quarts per person every year. (US Department of Agriculture)

5. Indiana produced 352 million pounds of popcorn in 2017 and is the nation’s #2 producer of popcorn. (My Indiana Home)

6. Pulaski county, Indiana is the popcorn capital of America. (The Washington Post)

7. Popcorn is the official state snack for Illinois and Indiana.

12. About 90% of the sales of unpopped popcorn is sold to consumers for at home consumption. (Aghires)

15. Approximately 70% of all popcorn is eaten in the home (home popped and pre-popped) and about 30% outside the home (theaters, stadiums, schools, etc.). (The Popcorn Institute)

16. Microwave popcorn saw a 20% growth in retail sales in 2021, compared to the previous year. (Inside Indiana Business)

18. Popcorn is a profitable snack food that can boast profit margins of 80 to 90 percent. (WebstaurantStore)

19. According to a survey done by National Today, the top 10 popcorn flavors are:

21. Popcorn can pop up to 3 feet in the air. (seecalifornia.com)

22. People used to believe that a little demon lived inside the popcorn kernel and threw such a tantrum when he was angry that the corn exploded. (New York Magazine)

23. Popcorn kernels expand up to 40 times their original size. (American Society of Agronomy)

25. Ashrita Furman holds the record for most popping popcorn caught with both hands in one minute. He caught 34 pieces of popcorn. (Guinness World Records)

31. Most popcorn comes in two basic shapes when popped – butterfly (or snowflake) and mushroom. Butterfly popcorn has “wings” and a light crispy texture. It’s best consumed when freshly popped. Mushroom popcorn is round with a large, rough surface area. It tends to stay crispy longer than butterfly popcorn, and it’s sturdy enough to handle many different types of toppings.

32. Popcorn’s scientific name is zea mays everta, and it is the only type of corn that will pop. (seecalifornia.com)

33. In South America, kernels of popcorn found in burial grounds in the coastal deserts of North Chile were so well preserved they would still pop even though they were 1,000 years old. (popcorn.org)

34. In 1948, Herbert Dick and Earle Smith discovered small heads of corn and individually popped kernels deep in a dry cave known as the “Bat Cave.” The kernels have since been carbon-dated to be approximately 5,600 years old. (The Spruce Eats)

35. Popcorn was an important food for the Aztecs, who also used popcorn as decoration for ceremonial headdresses, necklaces and ornaments on statues of their gods, including Tlaloc, the god of rain and fertility. (hopi popi)

36. The Aztec language even has a word for the sound of many kernels popping at once — totopoca. (NPR)

37. Cracker Jack was introduced in 1803 at the World’s Columbian Exposition by Frederick William Rueckheim and his brother Louis. The first recipe, made with popcorn, peanuts and molasses was deemed too sticky. In 1896, Louis discovered a way to separate the molasses-coated kernels (the process is still a closely guarded secret today). He gave a sample to a salesman who exclaimed, “That’s crackerjack!”, and the Cracker Jack we know today was born. (Wikipedia)

39. Popcorn was a popular breakfast food during the late 19th and early 20th centuries. It was eaten just as we eat cereal today. (popcorn.org)

40. At first, popcorn was sold to movie goers from street carts because movie theaters didn’t want the smell or mess of popcorn in their establishments. The Great Depression changed everything. Movie theaters started luring in customers by selling popcorn for 5 to 10 cents a bag, a luxury most were able to afford at that time. (Smithsonian Magazine)

41. During World War II, Americans ate three times as much popcorn as usual because sugar was sent overseas for U.S. troops, which left little excess for making candy. (USDA)

43. The first microwave popcorn was made by Pillsbury in 1982. It contained real butter, so it had to be kept in the freezer. (New York Times)

44. Any kind of popcorn you buy that was grown in the US – organic or not – is non-GMO. (Prostate Cancer Foundation)

48. Popcorn is a whole grain food and high in several important nutrients. The nutrient content in a 3.5oz (100g) serving is:

50. Popcorn has more fiber than pretzels or potato chips. (Livestrong)

51. Unpopped popcorn shouldn’t be stored in the refrigerator or freezer. This will dry out the moisture in the kernel, reducing its ability to pop. Popcorn should be stored in an air-tight container in a cool, dry place, such as a cupboard or pantry.

If you like this article, put a Pin in it!

Is Popcorn Healthier Than Chips?

What Is Red Popcorn? Here’s Everything You Need...

I Made Popcorn in An Air Fryer and...

Why Some Popcorn Kernels Don’t Pop

How Much Popcorn Per Person? Here’s Everything You...

Does Popcorn Expire? Here’s Everything You Need to...

Hi, I'm Kristy. I have always been pretty much obsessed with popcorn. I'm excited to share everything I know about popcorn, and everything I learn as I begin this journey. Welcome to my popcorn corner on the internet!

Popcornity is a participant in the Amazon Services LLC Associates Program. As an Amazon Associate I earn from qualifying purchases. Thanks for your support.